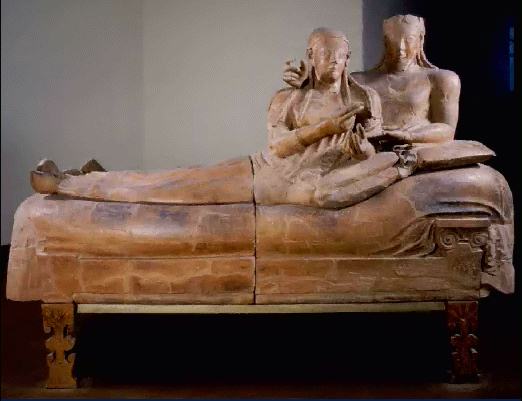 The Etruscans had a long history in central Italy rich in the arts. Their origins are lost in prehistory but this civilization endured from the time of the earliest Etruscan inscriptions (ca. 700 BC) until its assimilation into the Roman Rebublic  in the 1st century BC. They built powerful city states with paved streets, sewers, exquisite palaces and public buildings. They were prolific sea traders amassing abundant wealth and bringing experiences of other cultures to enhance their own. Etruscan culture in turn strongly influenced the arts and culture of the Roman Empire including architectural styles, religious practices, water and drainage systems, and the toga. 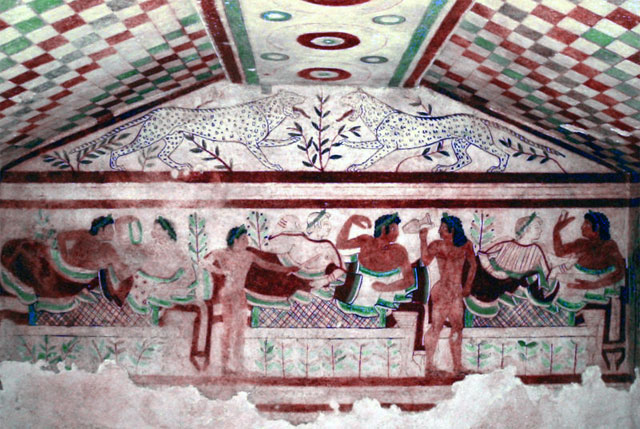 Some of the most amazing works remaining are funerary. The Etruscans had a built cities for their dead with striking rock cut tombs. These tombs reflected the art, architecture and culture of Etruria. The walls of many of these tombs were covered with colorful frescoes celebrating nature and the good life. Some show cheerful scenes of banquets, games and musicians others show scenes of nature and ritual. 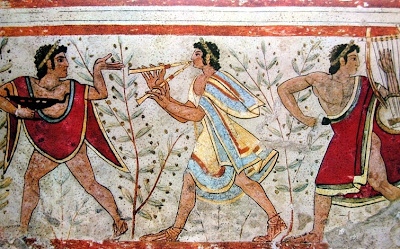 Tomb of the Leopards, Tarquinia

Etruscan cremation urns and coffins were often made of ceramic. Their potters were masters of earthenware or terra cotta clay. Some of the full size coffins constructed of earthen ware are incredable  works. One of the most well known is the Sarcophagus of the Spouses.  There are a vast variety of these.

Cinerary Urns were fashioned in many different styles over time. Some are gorgeous lidded vessels with slip painting and additions of small maodels of votive vessels. A form that is echoed in other world cultures through time is a figurative vessel with a "portrait" of the deceased. Another is a small sarcophagus form that had many permutations over time, some are very smiple and othere extremely ornate. 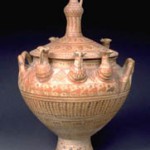 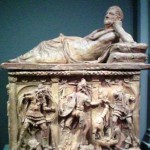 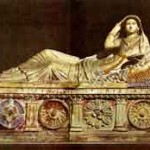 There is a virtual wealth of information online to peruse. Google Etruscan Ceramics and go from there. The history of ceramics never ceases to amaze. Check out these sites for starters: http://www.ou.edu/class/ahi4163/files/main.html and/or http://www.metmuseum.org/toah/hd/etru/hd_etru.htm